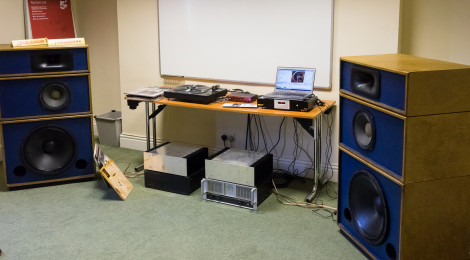 This short report is a little late, but better than never.

Having attended the previous two shows, and enjoyed them immensely, I decided to exhibit my system at the show. I spent a few days in a panic whether I would manage to fit it all into one of my cars, in the end it all went into a Yaris Verso, although the ground clearance was somewhat compromised.

Saturday evening was very pleasant, setup didn’t take me too long, I ambushed a few unsuspecting bystanders to help carry some of the larger boxes upstairs. After grabbing a pint at the bar I set about setting up the room correction with the microphone and once I had the music playing had a steady stream of visitors. I had a final wonder round and a good listen to Rick’s (Bandit Pilot) system in the room below mine, then settled down for the night.

Sunday the room was busier than anticipated, I only very briefly got out to swing round to Hifiwigwam/PFM member Orangeart’s room as he was using a very similar setup to mine. Anybody who was willing to talk to me was very positive about the system. It isn’t the easiest system to explain, but I did my best for anyone who made the mistake of enquiring about anything.

In the end I had it sounding fairly good, the speakers were setup a lot wider for the seating distance than ideal, but I wanted to cover as many chairs as possible, only the imaging was really compromised. The bass was a little hit and miss, I had the room correction fairly well tuned but it usually takes me more than a day at home until I’m happy with the overall balance over a lot of albums. Overall I was very pleased with the sound, and the room really didn’t hinder anything.

The day didn’t really feel long enough, there was plenty of music I would have liked to have played, but just forgot in the busyness of it all. Oh well, there is always next year.

Picture credited to Alfie Wright, many more of his pictures, and others from the show can be found here: http://www.hifiwigwam.com/showthread.php?117763-Scalford-Pics