I have wanted one of these since I read the DIY supplements in Hi-Fi World. The design of this amplifier was published in 2001, from when this kit dates.

I purchased it as a box of components, with only some of the tag boards completed.

The power supply is tube rectified with two 5U4Gs, followed by a choke. The initial gain and phase splitting is handed by an ECF80, followed by a pair of EL34s in ultra linear push pull.

Construction was simple point to point with three tag boards. 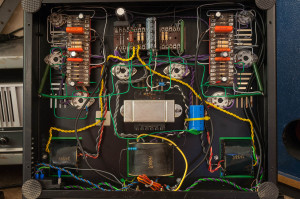 I quickly tested the 1khz THD to make sure the amplifier was working as expected:

It has made a nice addition to my amplifiers, currently driving the horns in my DIY speakers.